For you, a suprise!

About 3 weeks ago, I was admitted to the hospital for chest pain. They did lots of tests, did an ultrasound of my heart called a 2D Echocardiogram and found a crazy lump in my atrium and then did another test called a TEE (transesophageal echocardiogram) where they sort of sedate you and jam a tube down your throat, ultrasound through your esophagus to your heart (which is now a mere 2mm away or something crazy) and they found that the crazy lump on my atrial wall was nothing to be worried about, in fact it wasn't a lump at all but some fibers that are no big deal. I was released and all is well. During this time they did a pregnancy test...which I was secretly hoping would be positive...but it was negative. Oh well. We weren't really trying anyhow.

Fast forward to last Friday 11/14. Still no period. Sore breasts. Moody. PRAYING for my period so this hell could end.
The alarm goes off, it's 6am. Trevor gets in the shower...I have to pee. I can't fall back asleep. Peepeppeeeeepeeepeeeeee. Damn! I guess i have to get up. I decided to take another pregnancy test. The best time is in the morning, first pee. I have a pregnancy test, by chance. So, Trevor's in the shower I lumber into the bathroom, we exchange Good Mornings.

I pee on the stick.
I watch it progress.
Trevor showers. 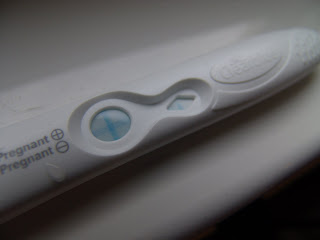 (not my actual test)

My hands start to shake and I fumble for the instructions, I compare. It is, in fact, positive. Holy SHIT!

I ask Trevor if he wants to see something crazy. He pauses and says, Sure?
I jam the test through the shower curtain and he is unsure of what he is looking at. I shout that it's a pregnancy test....and it's POSITIVE!! He looks at me with disbelief...we both are just standing there, water going everywhere, we are going to have a baby.

Through out the day I take another test...it's still positive. However, Trevor still is not convinced. He tells me to go the hospital (where I am an RN) early before I have to start my shift and see if any of the docs will write a script for me to have a blood test. So I do. I go to work, I find one of the docs I work with all the time, tell them the situation, they tell me I don't need the test, that the urine tests are accurate, but if my husband insists ( a great perk of my job). I go down to the outpatient lab, they draw my blood, and a few hours later I find out that my serum quantitative Hcg level is over 7,000. This freaks me out because I have no idea what that means. I look it up and learn that a non-pregnant woman's Hcg is <5. My number indicates I am somewhere between 5-6 weeks along. Which is what my OBGYN though when I called to make an appt. earlier in the the day. I call Trevor, he can belive now. When I come home from work we go out to eat. We don't say much....we stare at each other with wonder...with fear...with joy...with anticipation.

Email ThisBlogThis!Share to TwitterShare to FacebookShare to Pinterest
Labels: Days To Remember, Pregnancy

Ahhhh! Congratulations! This is so exciting! It actually brought tears to my eyes reading this, I'm so happy for you. I can not wait to read all about your journey.

What great news to start the day!

Thanks Kate!
I am still in a state of disbelief. I know you can probably relate. You don't look pregnant...you don't really FEEL pregnant...you haven't even SEEN real proof yet. But there it supposed to be a human life...inside of you. So crazy.

My jaw is still on the floor, almost a week later.

Again, this is just crazy. You couldn't belive it when I was pregnant, and now I have to wrap my mind around the fact that you are.

This may take a little while :-)

Congratulations! It's so awesome. Thinking good thoughts for you!

(Found you via Sam!)

YYAAAAAAYYYYY!!!! CONGRATULATIONS!!!I have tears in my eyes! How wonderful!
I didn't wait to tell everyone either.
So happy for you! What a lucky baby!

Thank you all for your kind words and thoughts!