In 5 days we leave for a well deserved vacation on Sanibel Island, FL where Trevor's parents have a house...and where they are also currently living....as it is winter nd they are lucky ducks.
Trevor's sister, brother in-law, and our niece and nephew will also be there vacationing with us. Sounds like an awesome family get away, right?

Believe it or not, I am DREADING our first day with them. Why? Well....because since the last time they say me in a short sleeved T-shirt I started my half sleeve tattoo.... 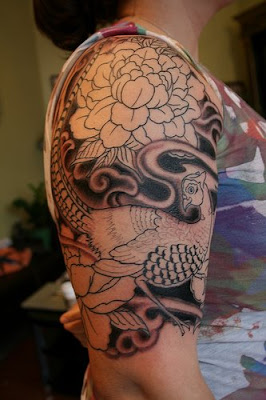 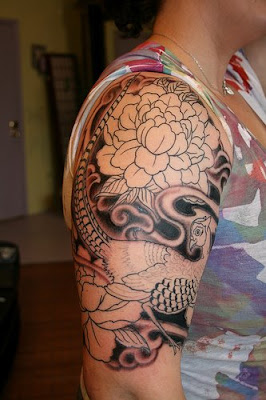 It's something I have wanted for a long time. I put a lot of thought into it, I thought about my parents, Trevor's parents, our future kids, aging, the children's weddings (what will I wear so that I won't be the crazy Mom with her huge tattoo all over the place), and a million other things. Ultimately my husband was psyched about it, I was psyched about it and I decided to take the leap.
Obviously it's not finished and that's because after my 3rd session I found out that I was pregnant! YEAH! But BOO!! for finishing my tattoo! Now I'll be waiting until this fall or beyond to see the final product. See, my INTENTION was to show it too them all AFTER it was complete, not that they would recoil in horror any less, but at least they'd be getting the final product. After that plan was foiled be the fetus, I began planning on showing them before they left for FL. But there was never a good time...I would be on the verge of telling them...the words would be on the tip of my tongue...my hand on my sleeve to pull it up and reveal...AAAAAND then I would chicken.

NOW. NOW, I am their pregnant daughter in law with a huge tattoo. They are going to DIE. It would be one thing if we weren't going to be frolicking around in our bathing suits for a week straight...BUT WE ARE. Sigh. I am just dreading this whole thing. I wish in the moment when they finally do see it I could blurt out all of the things that I thought about when making the decision to get this...that I thought of them and that they were LITERALLY the ONLY reason I felt nervous to get it.
My own parents will have to love me forever and the accept me for me, and they know who I am, they GET me, I was never worried about their, or anyone else's opinion.

All I can think of is when Trevor showed his Mom the beginnings of his full sleeve tattoo and all she said was, "It's SO BIG" with this look of disappointment on her face. My husband thinks they'll be fine, and actually finds humor in my nervous-first-day-of-school-tummy over this whole thing. He just doesn't get it....and I have seriously thought of not going because of it, isn't that ridiculous!!?!?!??!

So...what do you think. Should I bust out an email to them before we get down there or should I just show up in a short sleeved shirt and have his mother faint in the airport?

Please advise.
Posted by Kristin at 6:06 AM

Email ThisBlogThis!Share to TwitterShare to FacebookShare to Pinterest
Labels: Days To Remember, tattoo

Ooh, it's lovely! I'd do the big reveal somewhere other than the airport- like maybe wear a 3/4 sleeve shirt on the plane, then change into a tshirt once you get to their place, so if there is a conversation where they are disappointed/surprised at least it's not in public!

Well you won't have to worry about it because I sent this post to her via email so she's already seen it.

I'd be mortified as well so I have nothing to offer. Take a picture of her face or videotape it for me.

And I've said it before: if you want to back out I'll gladly go in your place. Just give me 24 hours notice.

Thanks a lot Sam. You're a great supporter. Jerk.

Pseudo: Thanks for the compliment...and I have bought ALL 3/4 length tee's for this trip to spare them the trauma. Ughghghhghghghghhhhhhhhhhhh.

I'd email them, so they can get all of their shock/comments out of the way before you arrive. =)

I really hope it goes well, and I'm a bit jealous that you get to go somewhere WARM.

OK, here goes my two cents worth as a total stranger, who just had your post sent to my email via my Google Sanibel Alerts.

Being a Mom of three daughters and now a Grand Mother of five, I can give you a clue as to what my reaction would be. Total shock! My mouth would fall open and I would probably cry. Then I would feel horribly bad that I had upset you by that reaction. And....I would hate the surprise part the most.

Not knowing your MIL, it's hard to say what her reaction would be. I personally don't like tatoos because I don't see them as a thing of beauty; only as something that I would never be able to change. But, MANY people do and I understand that everyones preferences about such things are different. That's what makes the world go round. So, I appreciate your right to do what you wish with your own body. If you like it, then I am happy you have what you wanted. Seems the only way to look at it. :-)

My oldest Grand Daughter is now 22 and I crammed my opinion down her throat for 20 years about NOT getting a tattoo or piercings other than one in each ear. She said she would never do that, for sure! First when she was around 16 she got a belly button ring, then four in her ears. When she turned 20 she came here at Sanibel to see me and there was a butterfly tattoo on the top of her foot. I nearly cried, but was able to control myself, other than appearing very disappointed in seeing it, which I truly was. But, I love her dearly and what's done is done. So, that is that! I don't love her one bit less and have gotten used to it and have never mentioned it again, other than to jokingly call her 'My Little Butterfly' now and then. :-)

I really can tell that this is bothering you a lot. I think you have to write a nice email telling your inlaws about the tattoo, about the thought you and their son put into it, before before you got it done. Tell them that you fear they won't like it, but you hope that won't ruin the pleasant week you hope to have with them.

Rest assured that if they love you, they may be upset, but they will still love you. :-)

You need to get it over with so you can put that behind you and totally enjoy your vacation without worry.

The weather forecast looks really nice for next week! Maybe I'll see you on the beach. :-)

Oh wow, this is a hard one. I think I'd send and email or give them a call before you go. If it were me, I'd have Collin break the news to his parents... But, like Marie said, I'd think I'd prefer they get their shock/comments out of the way before you get there.

I hope you have a wonderful trip! I too am jealous you are going somewhere warm.

Oh yeah, and I can't wait to see the final product!